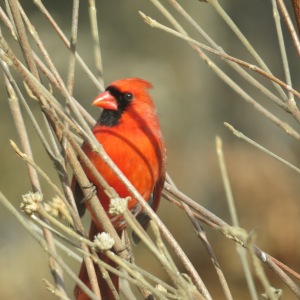 This has been an unusually good year for me. I took up my husband’s challenge to use my filming skills to make movies of birds. He’s been birding for thirty years, so at least he identifies the birds I can’t. Just try learning the difference between a Cooper’s Hawk and a Sharp-shinned Hawk, especially if you’re looking at a juvenile. Getting the footage has necessitated a steep learning curve. I had to figure out how to find those teensy creatures with my camcorder and how to make sure they were clearly focused when the sun shone on my LCD so that all I could really see was my own reflection. I’ve developed patience and learned to accept frustration. (What do you mean I forgot to hit record? That was a great shot. Or would have been. … If that Carolina Wren would have held still for five more seconds, I’d have had him. … Yes, I know it’s a good shot of a Cardinal. But ten seconds earlier, he was singing.) Filming birds is a game of waiting hours and missing the shot by seconds. In the heat. In the cold. I spent almost two months filming a pair of Pied-billed Grebes at the lake in our subdivision. Toward the end, it was cold, and I had to sit motionless for an hour or two at a time. I would finally be forced to go home by the need to find a bathroom, only to discover that my fingers were so frozen, I couldn’t unbutton my jeans.

It sounds like I hate the whole shebang, but making those movies is a blast. I’m a writer, and I love writing scripts for action movies. I’m a frustrated actress, so I narrate. Editing the footage is another skill I’m honing. It’s more fun than working jigsaw puzzles. I’ve never been a craftsy person, but creating titles–their arrangement on the screen and their color–is like making a necklace. Picking the right music is like altering a skirt to fit perfectly. For me, this is so much fun it  should be illegal. 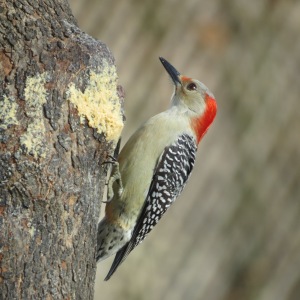 The year offered other rewards besides filming birds. I found a physical therapist who showed me the exercises I needed to do to control the pain from my bursitis. You can’t film much if you can’t walk much, especially if you can’t carry camera equipment on uneven terrain.

Less than fun was that a tornado hit us on May 31st. The bad news was that huge oak limbs crushed part of our roof. The good news was that huge oak limbs fell on the house and our insurance popped for a new roof. The other bad news was that many, many huge limbs fell elsewhere. Our insurance company shrugged and said: “That’s your problem.” It was costly. But we were uninjured, and what’s a little tornado here and there when everything else has been so delightful. Can’t wait to see what 2014 has in store.