THE TURTLE by Ogden Nash

I think it clever of the turtle in such a fix to be so fertile. 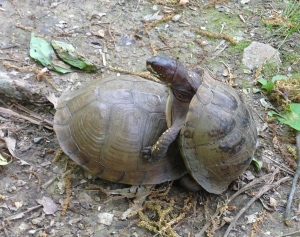 Modesty is built in for the turtles, and the female in this photo is no exhibitionist. The male, though, because of his fierce red eyes, looks anything but embarrassed. He, um, pardon the pun, appears to be wearing a turtleneck . Click on the photo for a better look at him.

Oh! It just dawned on me. That was no pun. It’s a metaphor. Our turtlenecks are named after turtle necks.

All my movies are on my YouTube channel: Jo Alwood